BIM is supposed to be good. Here’s the thing about BIM. It’s supposed to make things clearer. Right? Listening to what’s said about BIM, you don’t actually hear that “BIM will make (complex) things clearer”. I mean, a lot of what you hear is incomprehensible jargon, inscrutable gibberish. But that’s not really a problem. We all know we live/swim in a world of hyperbole and bullshitting, so we’re all accustomed to seeing through that, and kind of making up for ourselves what we think the usual rhetoric SHOULD mean.

And we do that. One of the main ideas we pull out of standard BIM rhetoric is this:

by using BIM processes, and tools, we’re going to make things clearer to everyone involved in a project, so that… we can be more efficient, effective, profitable, reduce waste… and so on.

It could. No bullshit, after 23 years invested in it myself, I still believe it could. But the direction needs to change. There’s an idea (a flawed one) at the core of BIM theory and practice that retards its progress.

Not to pick on this diagram, copyright for which is claimed by Bew and Richards, I’m citing it here simply because it represents an idea that threads its way through the  discourse of BIM. Let’s look closely at the graph and I’ll explain.

The graph, representing standard discourse, says this about Level 0: it’s CAD (computer aided design/drafting), and CAD is defined as Drawings, and drawings are described as “lines, arcs, text, etc.”: 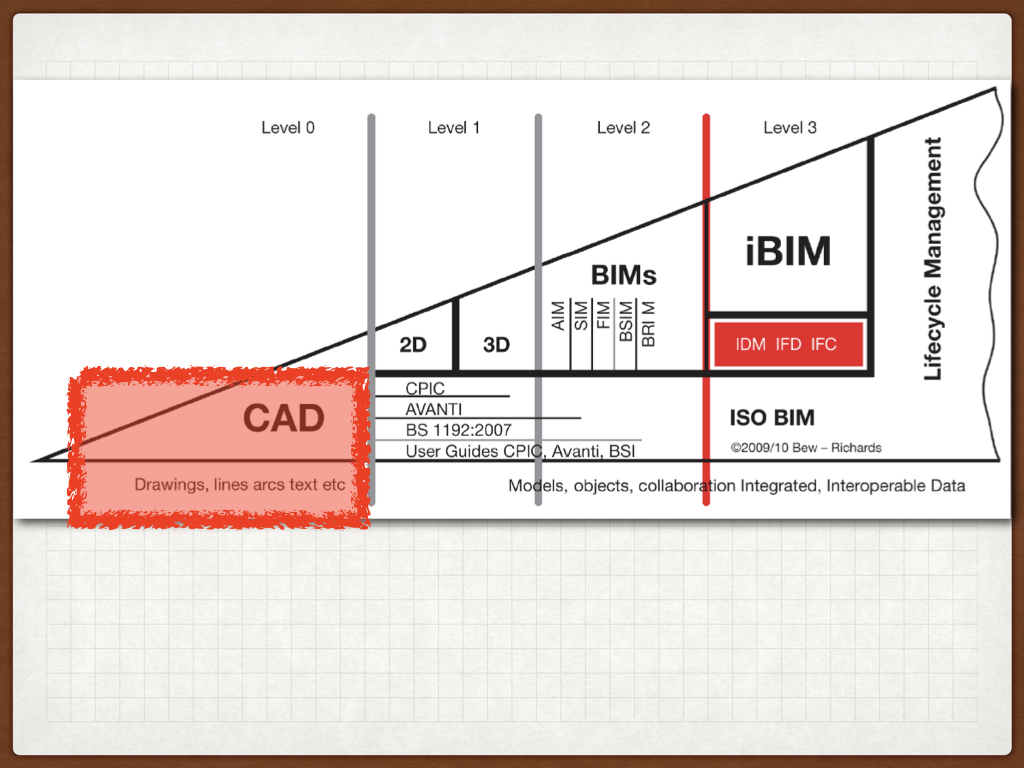 I’ll not dwell on this, but describing drawings as “lines, arcs, text, etc.” is like describing a horse as “bone, muscle, fur, and tail”. Look, that’s an absurdity; drawing has a function, and for a discourse to have substance it has to start at level 0 with a recognition of the function of drawings, like, what they are. What they do. I’ll come back to this and will describe what drawings are, what they do. Likewise models.  Models and drawings each have a purpose. I’ll say what that purpose is. 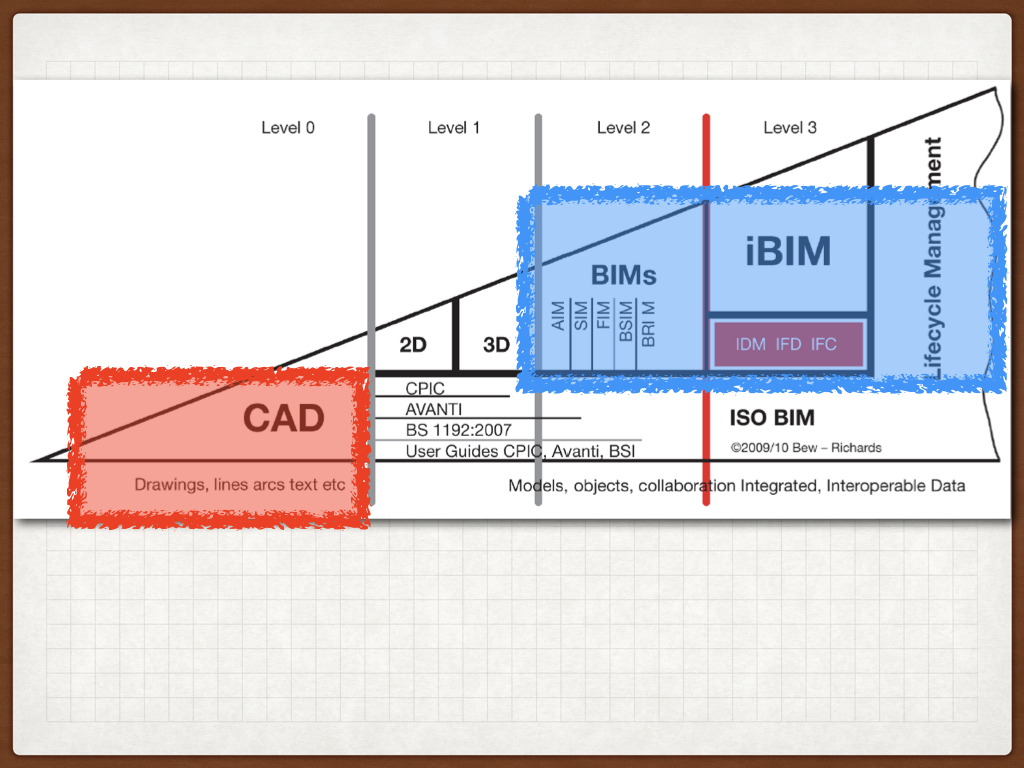 In the blue square, covering levels 2 and 3, now we have BIM. BIM is described, in the graph, as “Models, objects, collaboration integrated, interoperable Data”. Of those 4 items I’d like to just skip the last 3, because they’re less substantive than they’re usually claimed to be.

“Objects”: OK, there’s some relation between one modeled thing and another modeled thing or set of things, and you can have some control over those relations, and some relations are automated (like a door object contains an assembly of related items, and the door has a relation to a wall, and so on). Handy, and certainly standard now for 3 decades, but not of earth-shattering, kicking-drawing-down-the-back-stair level of importance.

“Collaboration integrated”: that’s overstated. Or is it? What does it even mean? Anyone who’s done BIM collaboration, actually done it, knows this is a weightless word combo. Collaboration takes (hard) work. The idea that it’s integrated into some kind of form(at) of data, is just goofy. I doubt there’s anyone who’s been in this business since this BIM maturity diagram saw the light of day (around 2010) 9 years ago, who any longer takes “collaboration integrated” seriously. It’s fluff, word play.

Let’s get to the one, of the four words here, that carries weight.

“Models”: Models are a thing. They’re a real thing. There’s substance to this one. Just as there is with “drawing”. These are two different things, model and drawing. Their function and purpose are related to each other (I’ll come back to that), but are very different; they have very different, yet inter-related, function.

Notice that we skipped level 1. Level 1 is shown as a gap area between CAD (drawing) and BIM (modeling). 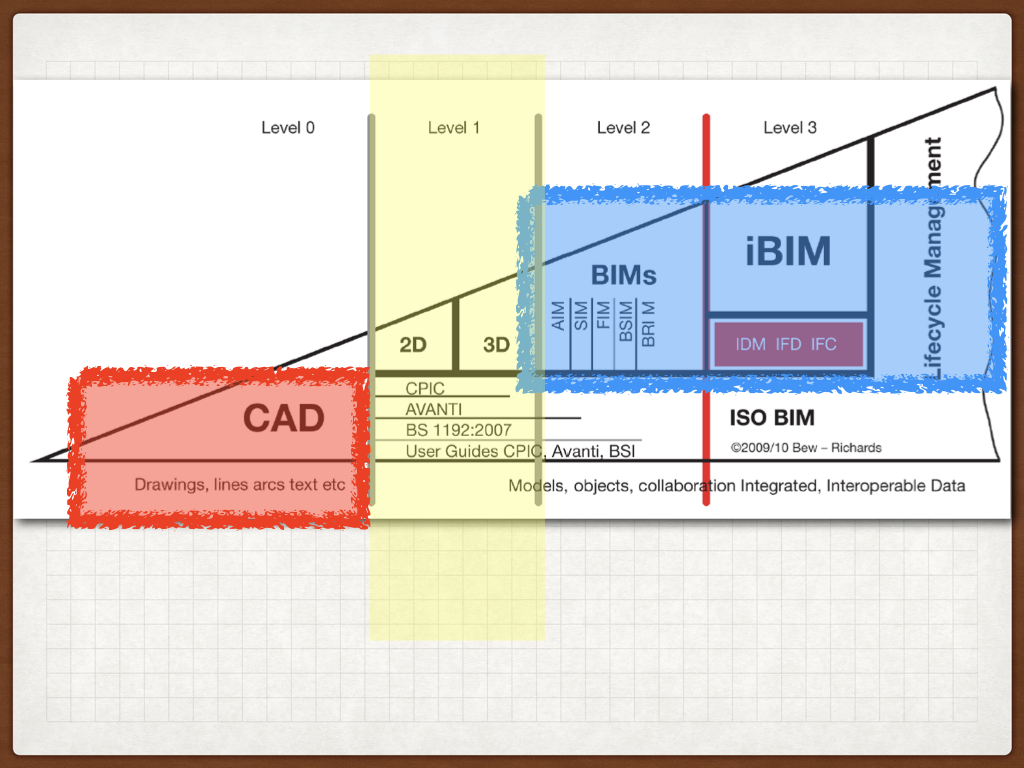 In Level 1, you have some 2D, which is to say, you have some “lines, arcs, text, etc. (drawings)”, and you have some “3D” which is not BIM, we’re told, not BIM because, as one can ascertain both from the graph and the standard discourse, “Level 1 3D” is not “object (oriented… inside joke for software developers), collaboration integrated, or Interoperable Data” enough. Well, enough said then.

I have nothing more worth saying about that (I could spend pages untangling the mess, but the result is the same: these are dismissible words). Rather I can get to the main point. There is a real, significant, problem presented in this graph, and in the discourse the graph represents. It’s a problem that’s retarding progress in BIM practice (and in it’s discourse), and greatly retarding progress in software applications (in their evolution/development) that support BIM process.

The problematic idea shown by the graph is that the CAD/drawing comes to an end, after a transitional phase, and then modeling takes over. This is an unfounded idea, wildly destructive, counterproductive, nonsense. And yet it attracts many people. I was one, attracted to it, for quite a long time. Then I gave it up for better ideas.

Let me describe why through more doodling on top of the graph, to tell the story why this idea has to be revised completely.

First thing is that Level 0 (lines, arcs, text) is not the beginning. And the beginning is not at all like that. By that I mean, drawing did not exist on its own without modeling. Not during the time of CAD, and not at any time before CAD either, or since.

At Level 0, there was modeling. It was modeling held in our minds, mental models in imaginary space, not in digital space. It is essential that this fact/reality be added to the diagram, so I add mental models: 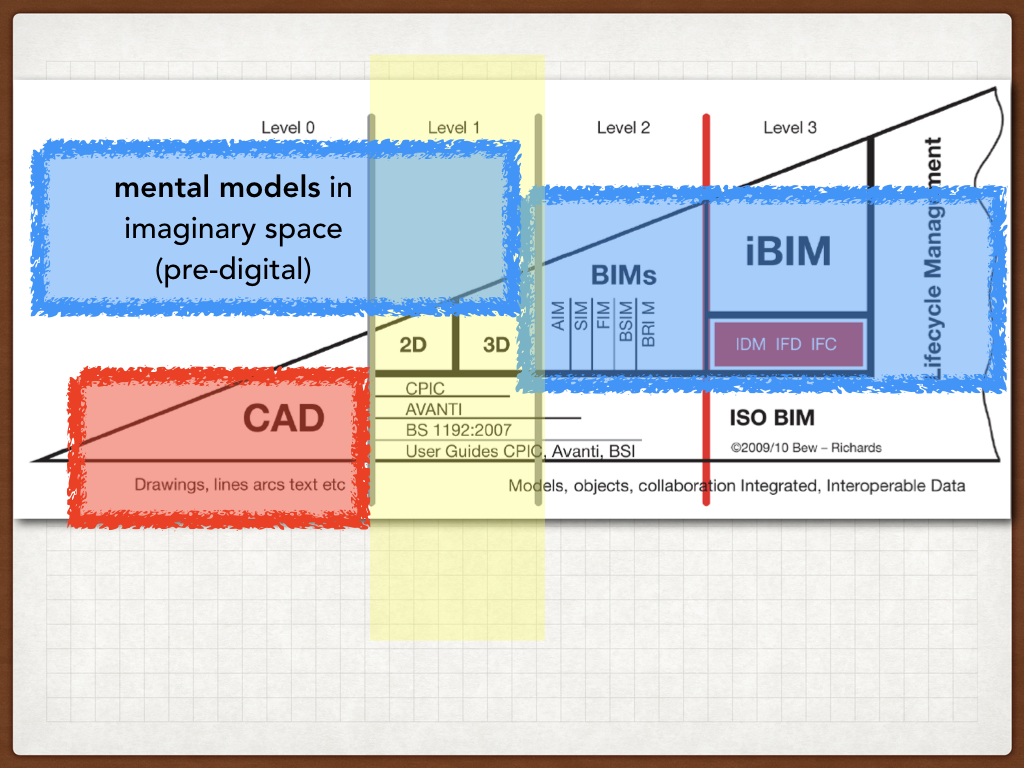 Mental models, models held in the mind, are not confined only to levels 0 and 1. No. They extend on the graph both to the right and the left. They exist together with digital models at levels 2 and 3, and they also exist before CAD, before level 0. So let’s add those. For simplicity, let’s switch to colored lines instead of shapes, blue for model, red for drawing: 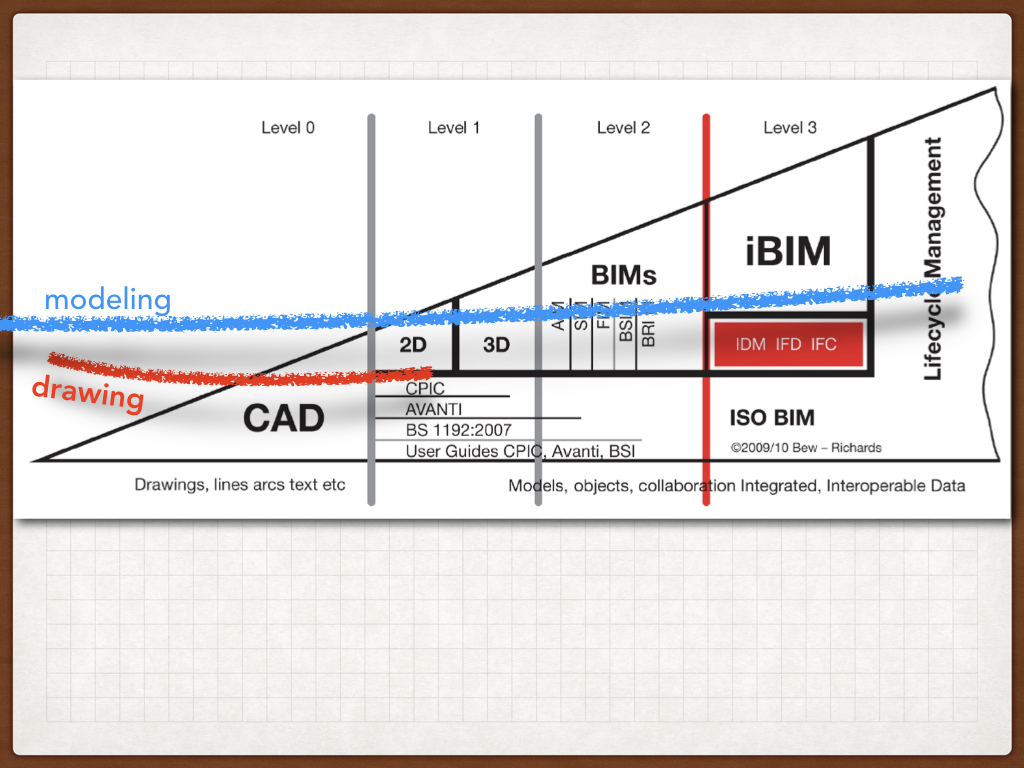 Let’s move now and look at Level 0, and to the left before level 0. Before Level 0, let’s say, there was Level “-1”. Modeling, in mental form, existed at both Level 0 and Level -1, and so did drawing. At Level “-1”, drawing was pre-computer, pre-software, pre-digital, so, done by hand, yet functionally, digital or manual, drawing was the same (more about that function follows): During Levels “-1” (pre-digital) and 0 (CAD), modeling and drawing existed together, and not just together, but in intimate inter-dependency. The one depends on the other.

But depends on the other for what? This is the essential question. The answer goes directly to why any of this matters:

Model and drawing depend on each other for understanding. No drawing makes any sense whatsoever, without the mental work of instantiating that drawing in it’s correct position within the wider whole of a more environmental model. “More environmental” in the relative sense: wider (compared to the narrowing act of focusing — looking closer — that is “drawing”). Models are wide, expansive, “environmental”, whole things, compared to drawing, which is narrower, focusing-in, looking closer.

Likewise, no model makes much sense at all, beyond just the superficial, without the skilled and practiced, determined act of taking a closer look, narrowing down, focusing in, at various places, on things that matter, articulating those and making them clear. Through this act, if it is sustained, our wider, more environmental, more expansive, models (whole things) become less fuzzy to us, more clear, more fleshed out, more substantive, more meaningful, useful, and in a word: understandable.

Therefore the double helix. DNA is double helixed, for good reason we can assume, not for no reason. Begin with the assumption that DNA’s form has purpose, that it takes the form it takes for good reason. Then investigate the reason(s). So it is for drawings and models. They’re intertwined strands, each strand dependent on the other. We should take this seriously. Experience, when we reflect on this, confirms the truth. We should take our experience seriously and investigate it, much further.

Models and Drawings; The purpose of each is to make the other make sense.

They’re in interplay, models and drawings. In the mind, we bounce back and forth from one to the other. And in that dynamic interplay, thinking is happening, thoughts are unfolded, made sound, built,  made substantive, and made clear. And communicated. OK? Here’s the fundamental, the sound foundation on which technology (and process) can be built and from which technology can contribute, evolve, develop, and deliver on promises like “we can make things more clear”:

INTERPLAY between wide (model) and narrow (drawing) is where thinking happens and understanding grows.

You’re not going to make anything clear, if you rip the two strands apart from each other, declare one (drawing) obsolete, throw it down the back stair, and run wildly incoherent into what you call the future, claiming that you’re going to make things clear, while you’ve happily, and idiotically, dismantled the basis, the observable mechanism, of thought itself, of thought and understanding: the INTERPLAY between wide and narrow, environment and focus.

The discourse and the graph are damaged, and damaging. It requires total revision. It is in the interplay between drawing and modeling where things are made, first of all coherent, and then clear.

Without that interplay, there’s just, nothing. WITH the interplay, then things are alive and growing. The helix, of interplay, predates Level 0, and runs through every level of technological development that has come so far, and every level yet to come. No useful innovation comes without this double strand in interplay between wide and narrow: The double strand represents fusion. Real fusion, actual existing fusion, fusion of drawing and modeling, that is carried on in the activity of the mind at work, designing and developing, building and operating, complex environments that are mental, digital, and real.

Back to the role of software then, and the idea that software is, and should be, evolving in support of that purpose.

The double strand represents fusion. Real fusion, actual existing fusion, fusion of drawing and modeling, that is carried on in the activity of the mind at work, designing and developing, building and operating, complex environments mental, digital, and real.

Should software development companies follow today’s standard discourse that relegates drawing to second class status, to remain static in it’s conventional form only, awaiting final judgement that it’s fully obsolete and now discarded? Is that what software companies should do?

Chapter 3 of my (free) book, Tangerine Media Innovation Spec 2018 — read it here on Apple Books for Mac and iOS devices, and here as PDF for Windows and Android — is a bigger boat. I dedicate it to everyone who makes drawings or models of any kind in any field for any purpose. Modeling and drawing go together like Led Zeppelin and bell bottom jeans. Like desert roads and motorcycles. Like the earth and the sun. They’re inseparable. One hardly makes sense without the other. Both to be carried forward into the future, together in fusion (drawings IN models), and in fusion, evolving, the evolution of media itself..

Part 2 of this post shows the bigger boat. It’s a catamaran.

One response to “You’re gonna need a bigger boat”