(very) Poor fit to the situation.

They miss the relevant point(s) entirely.

Sometimes they take a useful analogy and misapply it where it fails, oh, massively.

This carriage pulls itself; has an engine. An auto-mobile. No horse required!

“Haha! They’re so dumb! Innovative people wouldn’t do that! Don’t get left behind. Technology moves on; don’t be a laggard clinging on tight to old ways, stubborn fool…”

The analogy has value applied to some things, sure. It’s the stark misapplication I’m interested in though. I’ll get to that. First, here’s another early car.

Bad analogists put this analogy into a matrix like this:

In other words, they say that this transition:

It’s a mangled analogy. You might as well shoot your arrow with your back facing the target. Aim 180 degrees the wrong way. Analogy maximally off target. You’re missing:

– the relevant transition, and

– the actual function of drawing (the target of your derision)

They also fail to notice:

Let me fix both of these with two matrices.

That’s a significant transition. Its significance should be well and truly recognized. It needs to be considered thoroughly. The nature of that transition has to be taken seriously. Typically however it’s just completely ignored. Fans of the buggy whip analogy, applied here, simply forgot entirely that mental model was ever part of the picture. And remains so. I mean, “the picture”, things as they are, digital modeling in its entirety, is nothing without the mental model present, and developing along with it.

So that’s the relevant transition: from mental model, to digital model (assisting the development of the mental model)

Drawing has a separate function, but closely related.

That’s what they are, literally, a technique for expressing the act of focused attention. And this act has a purpose. Attention focusing is action in pursuit of the development of understanding.

There simply is no such thing as understanding the world around us, without engagement of the act and apparatus of focused attention. There is no understanding, of anything, without this. Focus is fundamental. Nothing happens without it. A world without focused attention is a world of inanimate objects. Stones. Wearing down to sand. Blowing across dunes.

Whether the drawings are

the underlying fundamental motivation for the expression of focused attention is the same. It’s the way the mind works, an interplay dynamic between the world as it is, and concise coherent symbolic representations of it. See Picasso’s remarks on “the plain bull” for more on this.

There is an interesting short book with some Picasso drawings and the following remark: 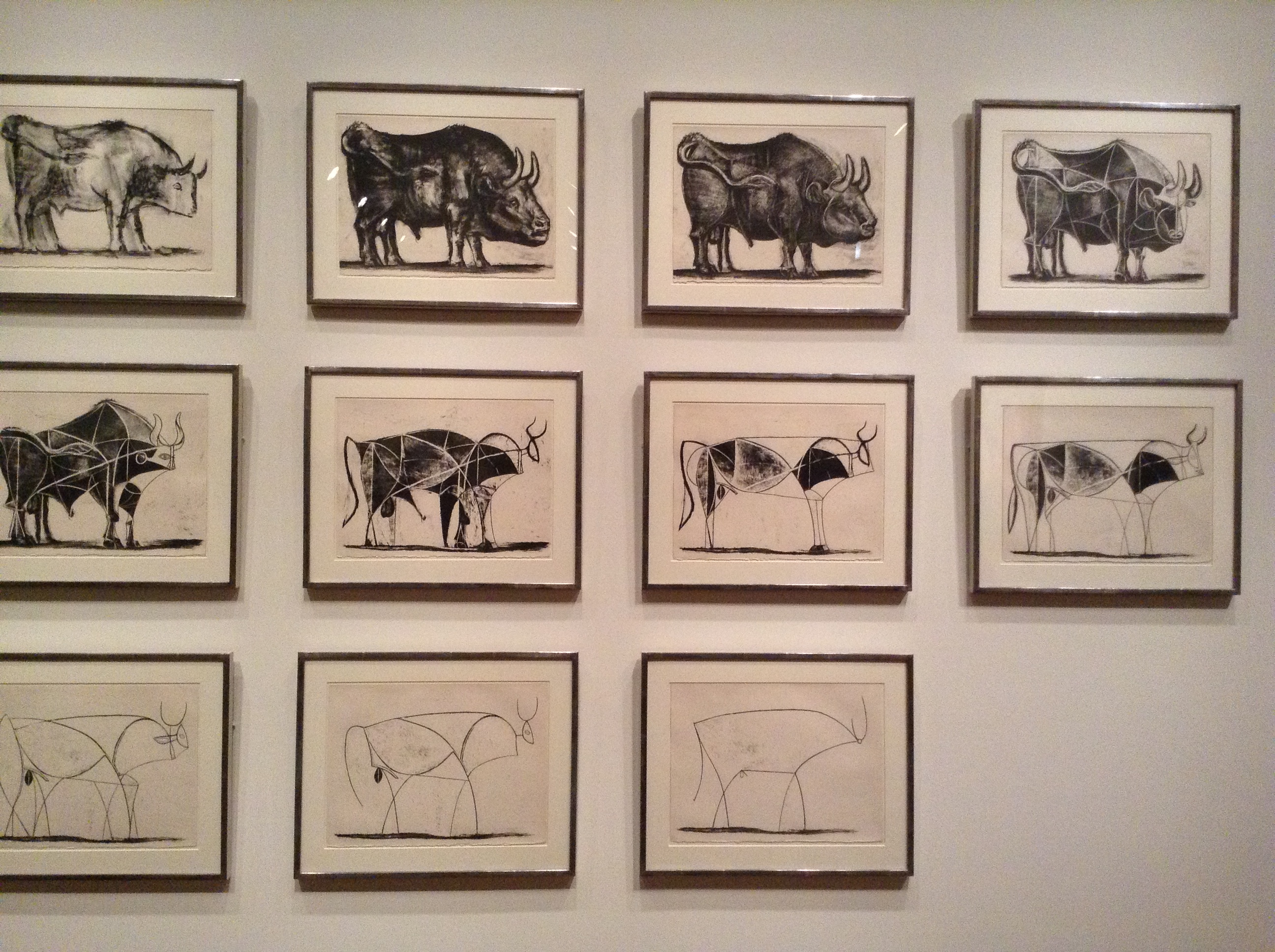 “In 1945 through 1946, Pablo Picasso produced a powerful series of drawings of bulls. When you arrange his bulls in order of detail the most detailed is a realistic drawing of a bull. All the features are there. Then, in a series of 18 drawings, Picasso step by step simplifies the previous image. The shading of the hide vanishes. The details of the muscle disappear. The texture is gone. The three-dimensionality evaporates. By the 18th bull, we see a line drawing – a simple image consisting of 10 curves and 2 ovals. But those 12 marks distill the essence of that bull – its strength and masculinity. The clutter is gone; the essence remains.”

“This final image was the only one in the series that Picasso entitled the bull. By systematically cutting peripheral parts (being careful not to turn the bull into a cow), we force ourselves to appreciate what’s important. Isolating those elements can give a great deal of focus…” – Edward B. Burger / Michael Starbird

“There is no abstract art. You must always start with something. Afterward you can remove all traces of reality.” – Pablo Picasso

‘By drawing, man has extended his ability to see and comprehend what he sees.’

The more digital worlds become “like” the real world, the more the need for articulate expression of focused attention is required, demanded in fact, precisely by those life-like digital worlds.

if you still doubt that, have a look at this:

The technique for expressing focused attention clearly, persists, and will persist. Imagining its elimination is, well, there is no greater absurdity. But its persistence is not enough. The technique MUST evolve.

So here’s a more suitable matrix, a more apt analogy.

WHAT KIND OF EVOLUTION THEN?

Download the TGN developer specification, a roadmap for the evolution of the expression of focused attention within digital models of all kinds (all apps, all platforms). In other words, the evolution and future of technical drawing. TGN Rigs are rigging for insight. They empower users to rig their models for clarity. Rigging for interpretive power, putting real FORCE behind thinking while modeling, while building.

Use TGN Rigs as an engine of interpretation, a vehicle of communication. TGN is your vehicle, baby. A machine of insight. An algorithm of understanding. Maybe you want to hear Tom Jones’ version.

The TGN developer spec is for free to anyone who wants it. A free book. Download:

Self critique of this demo is here:

(the dev platform I mention in the videos is iTwins.js, but TGN can be developed on every platform where TGN is useful and desired)

KNOCKING ON DOORS AT SOFTWARE HOUSES

I’ve been knocking on doors at software houses for a year, fishing for people who want to include TGN as part of their R and D, or build it into  their products. My ideas are in the public domain. Anyone can take them and do as they wish. I’m available to help any team that wants my help.

TGN MEETS USERS WHERE THEY ARE

TGN meets users where they are. See in the demo at viewing position P2 position of each TGN rig, the rig’s viewing camera, on the built in rig viewing path, transitions from perspective to parallel projection, and we specify in the TGN spec (the T2 features) a CAD I/O there. This allows (DWG, PDF, SVG) or other formats to be both generated there, imported, exported and any combination of workflows. Users can do all the CAD graphics (dims, notes, labels) in their favorite CAD app and the TGN rig will incorporate that, or, some developers will build graphics creation tools into their app and users can author those items within the TGN rig, then export each TGN at P2 to any CAD format.

It all depends on how much of the TGN spec each developer wants to build into their app.

The TGN spec envisions a TGN shared core, so TGN rigs can be shared across different apps and platforms and expressed with fidelity. While above the core, different Apps can do more, or less.

It’s not easy to get software companies to adopt new things. But I’ve done it before. I invented hypermodel, the fusion of construction drawings in-situ within BIMs. I proposed that to Bentley in 2007. They hired me to lead the team to build it into MicroStation and we released that as part of MicroStation in 2012. At least 6 different software companies after Bentley have developed their own version of that since then including TEKLA, Revizto, Dalux, Shapr3D together with Morpholio, and Graphisoft in their mobile BIMx. Here’s a page on my website showing videos of the Bentley drawing-model fusion from back around 2012: https://tangerinefocus.com/tangerine-2/earlier-media-innovations/

That was nice and useful. But it was only a first baby step and it had flaws. I’ve addressed many of those flaws, with the TGN spec.

TGN is the triple fusion of

along with the lessons of digital interoperability of our time. Oh, and by the way it’s totally about being good friends with existing CAD apps. The exact opposite of ignoring them and calling them archaic.

I thought of trying to get employed at 1 software company to do what I did last time: build fusion ideas into one software, siloed. But I don’t want to do that again. I want TGN to work for everybody everywhere in every modeling app and platform. I want the rigs to be portable from one app to another.

I’m sitting here in Sweden where I moved 3 years ago, building a cabin, while I wait for my fishing expeditions to get something on the hook:

I’ve talked with ESRI, Revizto, Bentley, Catenda, Rhino, BIMCollab, Xeokit, BlenderBIM, IFC.js, buildingSMART, and others. And many express interest. But you know how it is! YOU! You do. You know how it is. It takes some kind of spark to start it.

My hope is that 2 or more existing companies, it could be more at the start, but at least 2 companies who are already working together to get their models working together, that these 2 companies would want to work together to build TGN into their apps in a cross platform way that they would prove that it works. The proof being, that the TGN rigs ARE portable, expressed with adequate fidelity in each of the two apps when TGN rigs are shared from one app to the other. I talk about that in my demo videos above.

The download links to the TGN spec above are in 4 document formats (ePub, iCloud, Apple book, PDF). The book is in sections:

I’m in my cabin by the lake, waiting…

What happens in a world without focus: